Showing posts with the label music
Show all 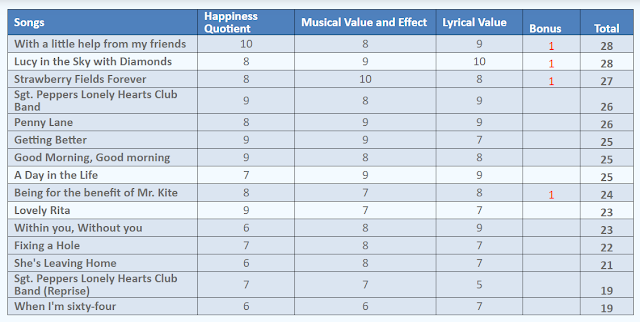 A few years ago I had disintegrated the album Sgt. Pepper's Lonely Hearts Club Band by The Beatles for my university class midterm. Obviously, I am as much of a lay man as any other, but just have had a keen interest in Beatles and their music since a very young age. I have revamped the same and share it for your reading pleasure. This was originally written on 20 April 2008. The midterm asked us to evaluate the songs of any album and then restructure the album listing as per what we thought was more suitable for the songs and flow of music. In order to evaluate the songs and structure I created a few metrics that would help differentiate one song from the other. The criteria were ‘ Happiness Quotient ', ‘ Musical Value and Effect ', ‘ Lyrical value and content ' and a ‘ Craziness/Catchiness Bonus '. Each criterion (except Craziness Bonus) is on a scale of 1 to 10. The Craziness bonus (1 or 2) is given to a song that I feel stands out amongst other songs and ha
Post a Comment
Location: Pittsburgh, PA, USA
Detailed Angle »
More posts

Vitalstatics
In search of the meaning

Popular posts from this blog

Elucidated Thoughts (Some by me, and quotes by famous people)

March 02, 2013
At some point you gotta decide who you gonna be. Can't let nobody make that decision for you - Moonlight (2016) "Leave the world better than you found it" - Khaleesi, Game of thrones You know you've reached the epitome of technological success when you can contain the knowledge of an entire 50000 sqft library in a coin size chip. - Me Financial resources should be given to those who are more concerned with making the world a better place for all. That should be the premise of resource and financial allocation. - Me.  "Do not go where the path may lead, go instead where there is no path, and leave a trail" by  Ralph Waldo Emerson Quis custodiet ipsos custodes? or  Who will police the police? - Original Latin phrase, which I first read in Deception Point by Dan Brown Does the man make the  suit , or does the suit make the man? - First read from Iron Man 3 previews One can always continue to learn from others Do not look down upon tho
Detailed Angle »

A foreigner's guide inside the brain of Donald Trump

February 22, 2017
I'm having a hard time deciding which title I like best: 'Make America Hate Again', 'Hitler's West Dream', 'Donald checks in'. Pick your favourite. We have to admit, Donald Trump is a real marketing genius. He is the Godfather of Marketing. He made an offer to the richest and most open-minded democratic country in the world, peddling his stance of "all muslims are bad", "all mexicans are bad", "extreme vetting", no global warming, everything Russian is good, anti-gay rights and America couldn't refuse to make themselves great again. He is the first president of a major country who has never held any political or governmental office, is a billionaire, has appeared on the cover of Playboy and he wants to befriend long-term enemies. Obviously to the outsider, these are all significant things and are mostly positive. Which is why, unless you are currently in a Muslim country, in Mexico, a Harvard graduate, or an uber co
Detailed Angle »

Closeness in the time of Cholera

March 14, 2020
Great Britain for India, Donald Trump for the Democrats, Iran and North Korea for most of the world, and Coronavirus COVID-19 for all of the world.  It takes a great adversary to bring together hundreds of millions of people together. It might not be seen, it might not be felt, but it may be within us. Today, we are fighting the COVID-19 coronavirus that started from China but has now spread throughout the world in a very short span of time. It's significant to realize that in these troubled times countries must collaborate and provide transparent information to one another, whether friend or foe, to ensure that the virus is eradicated and isn't able to spread further, to protect themselves and the rest of humanity. There is one common adversary today. That is the reason why all have come together. It was inevitable. This is human nature. We need a reason, we need meaning, we need fear. This is what the Bible predicted, this is what all other scriptures write about.
Detailed Angle »